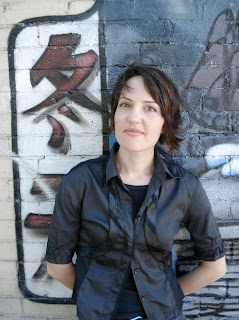 The audio work of Canadian Sarah Boothroyd has been broadcast on over 50 radio stations around the world, and published on over a dozen CD compilations.  Her work has been presented at galleries, festivals and conferences in Canada, the United States, Ireland, England, Brazil, Spain, Portugal, France, Italy, Denmark, Switzerland, Sweden, Germany, the Czech Republic, Slovakia, Bulgaria, Romania, China, South Korea, Nigeria, Kenya, and beyond.
Boothroyd's talents have been recognized in competitions held by the Canada Council for the Arts, the Ontario Arts Council, New York Festivals, La Muse en Circuit, the San Francisco Women’s Film Festival, the National Screen Institute, the Third Coast International Audio Festival, New Adventures in Sound Art, the National Film Board of Canada, the Canadian Association of Broadcasters, the Canadian Association of Journalists, and the European Broadcasting Union.
. . . . . . . . . . . . .
The following is based on interviews conducted in August 2011 by Marcelle Kosman of Pioneer Radio and Emily Corwin of Public Radio Exchange.
Briefly describe your background and approach to sound art.
Fresh out of high school, I studied visual art at Emily Carr University in Vancouver.  From there I took a meandering route through textile arts and creative writing at Capilano University, winding up with a degree in philosophy from McGill University in Montreal, before completing a masters degree in journalism at Carleton University in Ottawa.  Along the way I freelanced for print and broadcast media; designed and constructed costumes for theater companies; and wrote and performed vocals with a couple bands.
My background is eclectic and so is my audio work: I combine processed and unprocessed field recordings, archival film soundtracks, contemporary media reports, music recordings, as well as interview clips and other vocal material.  I strive to create atmospheric sound work that is cinematic, open-ended, and appealing to the mind’s eye.  I do so by chopping, layering and convolving plot, character and other traditional story elements into abstract soundpoems that maintain some kind of narrative arc, however impressionistic that arc may be.

I'd like to focus on your most recent sound artwork, All In Time.
All In Time by Sarah Boothroyd
What led you to create this 25-minute audio work?
In July 2010, I came across a tantalizing call for proposals from La Muse En Circuit in Paris.  As I was trawling for ideas to pitch over at Project Gutenberg, I became ensnared in The Time Machine by H.G. Wells.  Soon after, I found myself building a tower of library books about time travel, parallel universes, black holes, and space-time.  I became increasingly enthusiastic about the overlap between science fact and science fiction.  I started daydreaming about creating a sound artwork that would illustrate this overlap in vivid, fantastical colour – like a children's picture book where the pictures would be painted with sound.  I sent a proposal based on this idea to La Muse, crossed my fingers, and was notified in September of that year that I had hit the Radio Art Jackpot.
If you had to write a recipe for producing All In Time, what would it look like?
,,
ALL IN TIME
Preparation time: several weeks
This recipe makes 25 minutes
Ingredients:
3 minutes Clips from CBS Radio Mystery Theater episodes
6 minutes Clips from Physics Maven, Peter Watson
11 minutes Field Recordings (of clocks, newscasts, piano, etc.)
5 minutes Clips from Sarah Boothroyd and her family
Instructions:
1.  Sift through online scripts of CBS Radio Mystery Theater episodes to find programs about time travel.  Contact copyright owner and plead for use of specific clips.  Once permission is obtained, trim downloaded clips.  Thoroughly clean clips, removing hiss and extraneous noise.  Set aside.
2.  Conduct initial interview with articulate professor who teaches courses on time.  Log tape.  Write follow-up questions.  Conduct second interview.  Log tape.  Write follow-up questions.  Conduct third interview.  Log tape.  (Note: these clips form the backbone of the piece, so careful collection is essential.)  Set aside clips.  Arrange and edit logged tape into paper script, along with rough ideas for sound treatment.  Update script as ideas arise.
3.  Visit elderly watch repairman who has over 300 clocks in his home.  Make recordings, edit them, and place in folder.  In a separate folder, place relevant field recordings, sound effects and musical clips.  (Some recordings will be home-made, some will be Creative Commons or Public Domain.)
4.  Import the above ingredients into a large editing session, as laid out in the rough paper script.  (Don't worry if mix is fairly lumpy at this stage).  Divide this 25-minute master editing session into eight smaller editing sessions.  Work on each of these eight 'chapters' individually, in chronological sequence.  (Note: at this point you may choose to add Clips from Sarah Boothroyd and her family to enhance flavour and improve consistency.)  Continue to stir, lightly pound, mash, and blend until desired texture is attained.  Remove nonessential bits.  Adjust seasoning to your taste.
Best served with headphones or via octophonic speaker set-up.

How does All In Time fit into your existing body of work?
For starters, All In Time is the longest sound artwork I've produced to date.  Composing an abstract sound piece that maintains an audience's interest for half an hour was quite a challenge, especially compared with producing three-minute audio collages.
(I did produce a 54-minute radio work in 2009, but that piece is not really sound art, strictly speaking.  Although Shadows on Sparks Street incorporates sound art elements – a non-linear structure, atmospheric sound design, absence of narration, and so on – in essence, it's an historical murder mystery in radio documentary format.)
All In Time also bridges my earlier work in journalism with my more recent work in sound art by combining aspects of both disciplines: I pair journalistic elements (such as interview clips) with sound art elements (such as processed and micro-edited voices).
Also apparent in this work is my growing interest in philosophical ideas and waning attraction toward stories about a particular person in a particular circumstance.  For example, my recent work, Sex and Death, is much more abstract in tone than my 2007 work, Through a Door.

Sex and Death by Sarah Boothroyd

Through a Door by Sarah Boothroyd
What do you think success looks like in the world of sound art?
“An artist cannot fail.  It is a success to be one.”
~ Charles Horton Cooley 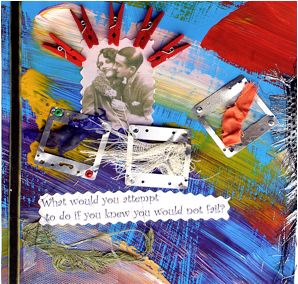